A while ago, my co-worker and fellow blogger Tim posted a tweed likening getting you PhD to a MMORPG. I thought this was a funny and also pretty accurate description and today I want to write about one of my favourite PhD side-quests: Teaching.

For context, I write this as a full time PhD student who is not expected to teach that much. About 10% of your appointment is a normal amount of teaching for PhD students in the Netherlands. This may be very different from the situation of some of you. Some of you may be teachers/PhD candidates whose main quest is actually teaching.  If it is, my post may not be that useful for you, but hopefully you have some nice tips to add for those of us who are inexperienced teachers.

Before I started my PhD I worked as a Teaching Assistant in various courses for two and a half years and I’ve been involved in the teaching of two different courses since I started my PhD. I love teaching and think it is very rewarding, but it is also very tiring and time-consuming. Today I share some tips to make your teaching experience as good as possible:

If you’re a new PhD student teaching a course or tutorial may seem intimidating. Especially if you have never taught before! There are several ways to educate yourself.

You can try and see if your university offers workshops or courses for teachers to improve their general teaching methods. You can also talk to more experienced co-workers and see how they approach their teaching. This can be in general, or related to the specific course you’re expected to teach. Experienced teachers hopefully will have hands on information that you can use while preparing for teaching.

Teaching can be a serious time consumer. Especially if you have to grade student work and provide individualised feedback. One tip that a co-worker gave me is to set aside a specific moment during the week for these type of activities.  That way you know how much work you actually have to do and you have some control over the amount of time you spend. Try to be realistic in your planning. I for one know that I cannot go straight from teaching to being focused on my research, so I’ll plan for some transition time as well.

What’s in it for you(r research)?

When your teaching duties consist of thesis supervision it may be possible for you to combine teaching and your own research. Often, the students will get involved in your project and (hopefully) collect some of your data. But even when your teaching is not that directly linked to your research there may still be links. Maybe the content of the course you’re teaching is closely related and you can use your theoretical insights during instruction. But even if there is no way to connect your teaching to your research, teaching a course is relevant to your personal and professional development.

Whatever you do, enjoy your teaching experience!

Happy questing and hopefully this side-quest will help you level up!

Have you been teaching and what are your tips for PhD students who are starting to teach?

Being an adult can be tough. We get burdened with all kinds of responsibilities and we’re expected to know what to do. I am probably not the only one who sometimes thinks: “Who told me to adult? I can’t adult!”. Recently, I became a PhD student. I think that doing science is one of the coolest things you can get paid for to do. Yet, often I am madly confused and all I can think is:

The main instigator of my confusion is my continuously growing awareness that a lot of my ideas about how to conduct science are wrong. Little can be so frustrating as discovering that what you thought was basic knowledge turns out to be demonstrable false. I will share some of the misconceptions I struggle(d) with.

The insignificance of p-values

Science is about many things but it is certainly about evidence; this is often where statistics comes in. Of all the statistical metrics, the p-value is certainly the most (ab)used. It quantifies the amount of evidence we have. It tells us whether or not a finding is due to chance. It tells us which hypothesis is more likely to be true. If we find a ‘statistical difference’ we can refute the null hypothesis and accept the alternative hypothesis. And finally, because we use p = 0.05 as a cut-off point only 5% of the significant findings will be false positives.

The (not so) funny thing is that all of these statements are false. The simple fact is that p-values cannot quantify evidence for or against a hypothesis. This is frustrating because this is how we want to use p-values. However, there is not a single metric in classical statistics which can quantify the likelihood of one hypothesis over another. Another frightening notion is that much more than 5% of significant findings are false positives (see this and this).

There are of course many other metrics other than p-values, for example the confidence interval. A 95% confidence interval is commonly thought to give us an interval of which we can be 95% confident that it includes the true value. Again, this common interpretation is incorrect. It even has a name: the Fundamental Confidence Fallacy. Other typical fallacies include the belief that the width of the interval conveys something the accuracy of the measurement (the Precision Fallacy), or that values inside the interval are more likely than those outside of the interval (the Likelihood Fallacy). How common these misconceptions are was highlighted by a study which found that only 3% of researchers correctly interpreted confidence intervals, while 74% agreed with three or more incorrect interpretations.

What about effect sizes and correlations? Certainly, they must be informative?! Yes, they can be. However, just as p­-values and confidence intervals, the correct interpretation and use of effect sizes and correlations can differ substantially from common practice. For example, a correlation estimate in a study with 20ish participants is often so unreliable that a correlation of r = 0.40 might just as well be .07 or .65. To reliably estimate a correlation you will need hundreds of participants, while most studies use less than 50. Additionally, there is the misconception that the size of an effect or correlation also tells you something about the size of the evidence.

Several decades ago it was already argued for a clear distinction between explorative and confirmatory evidence. It is common practice to explore a dataset to see if there any unexpected but interesting findings. The trouble starts when you attempt to do a statistical significance test to see if the interesting finding is ‘real’. The validity and interpretation of a p-value depends on the sampling plan; without a pre-established sampling plan it becomes impossible to meaningfully interpret a p­-value. As such, a ‘surprise finding’ should always be backed up by a replication study which has a pre-determined plan for sampling and analysis. Only such a study provides us with confirmatory evidence.

Although replications are extremely important for cumulative knowledge building it is not yet common practice. What is more, when replications are done the results are often not that positive. Recently, the massive Reproducibility Project finished with well-powered replications of 100 published psychology studies. Only 39% of the effects could be replicated and the mean effect size was substantially lower than in the original studies. Does that mean that the remaining 61% are false positives? Not necessarily, but this project highlights the importance of not relying on a single study to make any conclusion.

We’ve seen that many common statistical measures are not what they appear to be. Should we stop using p-values altogether? Some do argue this and say that Bayesian statistics is the better alternative. Others argue that we should simply be much more careful but that we can still meaningfully use classical statistics. Surely, we should move towards making pre-registration the standard. Additionally, we should perhaps ‘slow down science’ and replicate a finding several times before we are satisfied with the amount and quality of the evidence.

At the end of the day, I still know little about how to science. That is why I am glad that I am not alone; I have already learned so much from researchers such as Eric-Jan Wagenmakers, Daniel Lakens, Richard Morey, and many other. Furthermore, there is you, the reader of this blog. How do you think we should and should not do science? 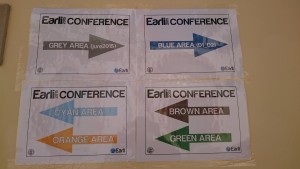 Just before our summerbreak, we uploaded the post ‘useful tips when attending a conference’. In this post several PhD-students from different universities in the Netherlands provided, as the title says, tips for when you are about to attend a conference. Just last week, I attended two European conferences together with some of my colleagues, the JURE (Junior Researchers conference) and the EARLI (European Association for Research on Learning and Instruction). In this blogpost I’ll reflect on how the tips from the post mentioned above helped me and expand on them further.