“In classrooms on all populated continents of the world, learners are engaged in learning content in a language that they do not speak at home. Depending on where you are, you may know this as Content and Language Integrated Learning (CLIL) or under another name.

Through such approaches, learners develop as language users but also have the opportunity to broaden their horizons and to grow as global citizens. In these uncertain and even tumultuous times, having the knowledge, skills and attitudes to communicate across and within cultures and communities has never been more important.”

So read the text on the homepage of World CLIL 2022: a two-day conference that took place this month, dedicated to bringing together members of the extensive community of researchers, teachers and teacher educators who are engaged in CLIL and other multilingual approaches to teaching and learning throughout the world. The goal: Learning from and with each other in all our diversity, and in celebration of the diversity of our learners.

Based on the overwhelmingly positive response from participants and speakers, this goal seems to have been achieved. 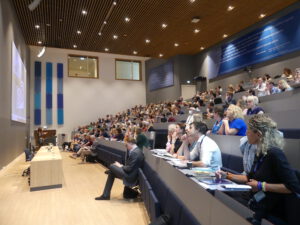 The conference theme referred to diversity among colleagues and also among learners. This was the common thread running through the four keynote addresses. Prof. Marisa Pérez-Cañado kicked off with an energising and engaging exploration of questions of “diversity, inclusion, and elitism” in CLIL settings, and of the extent to which old stereotypes still ring true. Prof. Joana Duarte followed this later with a reflection on how an asset-based approach to diversity, coupled with attention for global citizenship and intercultural communication, can help us to truly integrate the content, communication, cognition and cultures present in our classrooms.

On Day 2, Nihayra Leona focused on linguistic diversity, and how much there is to learn from the expertise and experiences of CLIL colleagues working in linguistically rich settings such as the Caribbean. Heading into the final afternoon, Prof. Fred Genesee rounded things off by exploring and dispelling the myth of the incompatibility between bilingualism and special educational needs.

Between these talks, we also saw a diversity of content, be explored in over 100 presentations, symposia, posters and workshops focusing on research, practice and combinations of both.

In spite of apprehension earlier this year, when we feared Omicron might put an untimely end to years of planning and preparation, the hybrid conference ultimately boasted nearly 400 attendees, stemming from 44 different countries and six continents. Nearly two-thirds of the delegates attended the event in person, at Leiden University in the Hague. Among the onsite participants, there was a clear sense of excitement and readiness to once again engage in networking and professional learning by coming together in person. 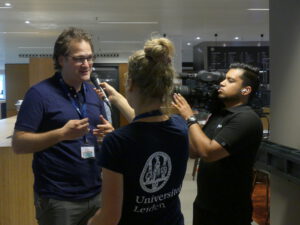 That said, World CLIL would have fallen short of its goals if not for the 144 delegates who attended from afar. Online presenters and audience members attended sessions together with colleagues on location: a challenge to facilitate but well worth the investment. In addition, online delegates were offered the opportunity to meet informally in a ‘Meet&Greet’ networking activity. In the breaks, interviews conducted by ‘roving reporters’ in The Hague offered online participants a flavour of the onsite experience.

A further enrichment were the nineteen colleagues who had received a scholarship due to challenging local or personal circumstances, and were offered free online access. Due to the conference’s limited budget, this would not have been possible had the programme been fully offline.

Now that we have got the ball rolling, it is time to hand over the baton. Our colleagues in Sheffield, UK, are already working hard on the preparations for their own CLIL 2023 event. After that, perhaps there is room for World CLIL 2024 in Edinburgh, Hong Kong, Willemstad or elsewhere…?

Through regular meetings in diverse locations, I for one hope that the international CLIL community will continue to grow in both its diversity and its unity, as we continue to learn by sharing our classrooms and sharing our worlds.

World CLIL was hosted by Leiden University, in collaboration with Nuffic, Amsterdam University of Applied Sciences, Utrecht University and the Dutch Network of Bilingual Schools.

Special thanks to the rest of the organising committee, to the PhD researchers from ICLON and students from the World Teachers Programme and the HvA who helped with the organisation and moderation, and to all who shared their work at this event. Interested in seeing what was on the programme? It is still available via www.worldclil.com.

Research into CLIL and Bilingual Education in the Netherlands: Where do we go from here?  0

My first encounter with bilingual secondary education (tweetalig onderwijs, or tto) was when I moved to the Netherlands in 2009, as a young and enthusiastic language teacher. Considering my already blossoming interest in Content & Language Integrated Learning (CLIL) at that time, I felt I had hit the linguistic jackpot. It seemed like pupils in Dutch bilingual schools were being offered the ultimate language-learning opportunity and I wholeheartedly embraced the opportunity to become part of the tto community.

Nine years on, Rick de Graaff and I had the honour of editing the Winter 2018 edition of the Dutch Journal of Applied Linguistics (DuJAL), which was dedicated to research in the field of CLIL and Bilingual Education in the Netherlands. Publication of this issue is timely considering that 2019 is the year that will not only see tto celebrate its 30th birthday, but also the year of the introduction of ‘tto 2.0’. Tto has a long-standing relationship with research which will hopefully continue into this new era.  I agree, however, with Dominik Rumlich’s comment from his ‘outsider’ perspective on the special issue that there is still much ground that can be covered. He goes into depth on a number of excellent pathways for future research, but I believe that there are even more directions we could head in.

So where do we go from here?

A young participant in my own research commented recently that tto is about so much more than just learning school subjects in English. In the light of the upcoming changes to bilingual education, it may also be time for research to distinguish more clearly between CLIL and other aspects of tto, such as global citizenship and personal development. Furthermore, as schools investigate approaches to teaching and learning that reposition the roles of teachers and learners (e.g. personalized learning), it might be valuable to investigate the viability of ‘traditional’ understandings of CLIL methodologies in such contexts, or whether these too need rethinking. A first step in this direction might be the investigation of whether a pluriliteracies approach as advocated by the Graz Group might suit the Dutch context, or whether a new, context-specific definition of CLIL might be more appropriate.

Alongside developments within tto itself, bilingual education continues to spread to other areas of education, with the first research projects into bilingual primary education currently underway, and an increasing number of colleges of further education adopting a new variant of the approach. This comes amidst a fierce debate regarding the Anglicisation of higher education and a recent call for universities to follow the pedagogical examples set by tto and CLIL. These developments into different areas of education may lead to new strands of research altogether, creating room for expansion of the Dutch CLIL research community. In a different area of higher education, the Netherlands is host to a number of specialized teacher education tracks at both higher vocational and university level (for example Leiden’s own World Teachers Programme), and it seems a missed opportunity not to investigate how we can most effectively prepare new teachers for the demands that await them.

The final area that stands out for me in terms of further avenues for CLIL research relates to my own baggage: that of the young, enthusiastic language teacher who could not (and still cannot) believe her luck at falling into the lap of tto. In Anglophone countries, CLIL is often the domain of the language teacher and not of the teacher of Chemistry, History or PE. This raises the question as to whether there might be room in Dutch CLIL research for approaches to integrating content into the broader language curriculum, in order to bring the benefits of this rich approach to language learning to a broader, more inclusive audience. Belgian CLIL could be a source of inspiration for this: as illustrated during the CLIL Connect Conference in Brussels this month, a key difference between our two contexts is that CLIL in the Belgian context is not restricted to English.

As I enter my tenth year in the Netherlands and of my relationship with her unique bilingual education paradigm, it strikes me that Dutch research in our field – while undoubtedly impressive – really is just getting started. I, for one, am excited to see where the next ten years will take us.

Access the DuJAL Special Issue on CLIL and Bilingual Education via https://benjamins.com/catalog/dujal.7.2.

For more thoughts on the potential for more content in the Modern Foreign Languages curriculum, see the website of the Meesterschapsteam mvt at https://modernevreemdetalen.vakdidactiekgw.nl/2018/03/30/visietekst-meesterschapsteam-voor-curriculum-nu/ (in Dutch). 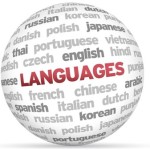 As promised in our last blogpost, in this post we share our view on what makes multilingual universities a success:

1. Promote teaching and learning through multiple languages
There is sometimes a tendency to promote the idea that being a multilingual university today means adopting English as the main language of instruction and marginalising courses taught in the national language. This is not the vision of multilingualism we imagine. As mentioned in one of the responses to our previous blogpost, our concept of a multilingual university is one that supports teaching and learning in the national language and additional languages. Decisions as to which language is used in which course will depend on the needs of the students, the program goals and the University profile.

END_OF_DOCUMENT_TOKEN_TO_BE_REPLACED

Last November a celebration was held to laud 25 years of bilingual education in the Netherlands. A month earlier a so-called “Manifest voor het behoud van het Nederlands” was published by four Dutch university professors making a plea to stop the development of English language university programmes. This “manifest” obtained some support in the Dutch media, for example in Volkskrant writer Aleid Truijens’ piece “In het Engels haalt niemand zijn niveau”. As bilingual and international education researchers and teacher educators at Iclon, we want to share with you 5 reasons why we believe monolingual universities are doomed to fail.
END_OF_DOCUMENT_TOKEN_TO_BE_REPLACED